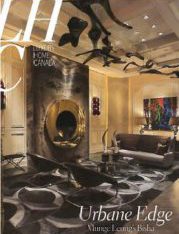 When Kelly Deck, owner and director of Kelly Deck Design, and her team began working on the 5,027-square-foot home that would serve as the grand prize for Vancouver’s 2010 Millionaire Designer Home Lottery, they felt a mix of genuine excitement and slight trepidation over the task that lay ahead. The VGH & UBC Hospital Foundation, which spearheads the annual fundraiser to support Vancouver General Hospital, UBC Hospital and the GF Strong Rehab Centre, wanted to take the event in a new direction by showcasing a contemporary residence. But the organizers were a bit concerned that British Columbia residents might not be enticed to purchase lottery tickets to try and win the home if it didn’t offer a traditional aesthetic.

“Typically, modern doesn’t appeal to as much of the market as a transitional or traditional home does, and this home had to appeal to a really broad market,” says Deck, whose firm was chosen to design all of the interiors of the newly constructed home. “In the design process, we had to think about how to make this a home that everybody would walk into and feel enveloped. We wanted it to feel warm, so we thought a lot about tactility and materiality. And I think [the organizers] were really excited when they saw the final result because people responded so well to it. It was a huge hit.”

In fact, all 116,000 lottery tickets for the magnificent three-storey ocean view home sold out in no time. With its well-planned spaces; a high-contrast colour scheme composed of sophisticated dark grey millwork, and plush, light furnishings; a beautiful collection of luxurious fabrics; and natural materials like hand-polished concrete, rift cut white oak, graphite, and marble, the residence was truly grand. Yet, as Deck notes, “It was still livable. It wasn’t inaccessible. And that’s our approach to every house we do. This home is a home that we put a lot of love into, and you can feel it when you’re in the house.”

That has been Kelly Deck’s philosophy since she founded Kelly Deck Design in 2005. She has always had a penchant for design—as a teen she studied interior design publications, and helped her father with home renovations. She graduated from the Emily Carr Institute of Art and Design and continued her studies abroad. But the decision to start a full-service interior design firm grew naturally out of her experience as the owner of an interior décor boutique, which she opened on Main Street Vancouver in 2002. After the business launched, Deck’s customers quickly recognized her passion and talent through her retail efforts. “People loved [the shop] so much that they asked me to start decorating their homes,” she recalls. In time, the work turned to renovations and ultimately the comprehensive design of high-end custom homes throughout the Lower Mainland, Vancouver Island and much of British Columbia.

Homeowners were drawn to Deck’s subtly feminine West Coast style, which strikes a seamless balance between the elegance of upscale living and the ruggedness of the local environment. “Our West Coast lifestyle is different from the Eastern lifestyle. It’s so closely connected to our time and experience of the natural beauty around us, and you really have to look to the outside for inspiration,” Deck says. “In terms of design, it’s all about the authenticity of materials. It has a natural, organic quality. It’s not overly embellished – it’s more about simplicity. And that’s what our clients come to us for.”

As Vancouver residents became familiar with Kelly Deck Design’s fresh and distinctive work, television viewers everywhere were becoming acquainted with Kelly Deck herself. Just weeks after she decided to close her retail shop in 2005 to focus on her sought after interior design services, she got an unexpected call from Toronto-based production company Fusion Television. HGTV was looking for someone to host a new show entitled Take It Outside, during which homeowners would have the chance to create outdoor versions of their favourite indoor spaces. Deck jumped at the opportunity, and from the get-go, the show was a bona fide hit. The burgeoning designer spent the next three television seasons fashioning spectacular outdoor living spaces while becoming a media darling, offering her expertise for newspaper and magazine articles, being interviewed on local and national television programs, writing her own column, “The West Coast Way,” and travelling around the country for speaking engagements. All the while, her firm continued to grow, and she soon had four people on her team to help her with an ever-expanding client list and a profusion of projects. Eventually, she had to make a choice.

“The television show was the best thing that ever happened. I’m so grateful for it,” Deck explains. “But my firm had grown so much, and we were doing such inspiring projects that I really felt like I had to put my energy into one or the other to make either sensational.” She decided to suspend her television career and focus solely on Kelly Deck Design. She undoubtedly chose correctly, as today her firm boasts 10 talented professionals who are all experts in their own right, from CAD technicians to production powerhouses. Together, they manage 15 whole-home projects at any one time, working closely with clients, architects and general contractors as they take them from the conception of a project to the final installation of the furniture.

“Our passion is designing beautiful homes and pleasing the people who believe in our work,” Deck says. “It doesn’t matter if the home is 2,600 square feet or 7,600 square feet, it’s still the same soulful and technical approach to designing it and creating it. What our team offers is not only a really fresh energy, but also this incredible care about seeing things through to the final detail and making sure that it’s what the client wants.”

As Kelly Deck looks into the future, she is excited about the thought of taking that same approach and applying it to new ventures in the commercial arena, including hotels, fashion boutiques and restaurants. “We have the expertise on our team to handle it,” says Deck, who hopes to find the right opportunities for that kind of expansion in 2012. In the meantime, she is happy to continue the work that has put Kelly Deck Design on the map and helped it develop a reputation not only as one of the industry’s foremost authorities on West Coast design, but also as a firm that exceeds its clients’ expectations. “Our homes are soulful and embracing. We are extremely committed to creating beautiful, elegant interiors that are an expression of the people who live within them,” Deck concludes. “And in the end, I just love seeing something that started out as a hand sketch on a piece of paper during a discussion with a client turn into a home that they love. That truly is magic.” 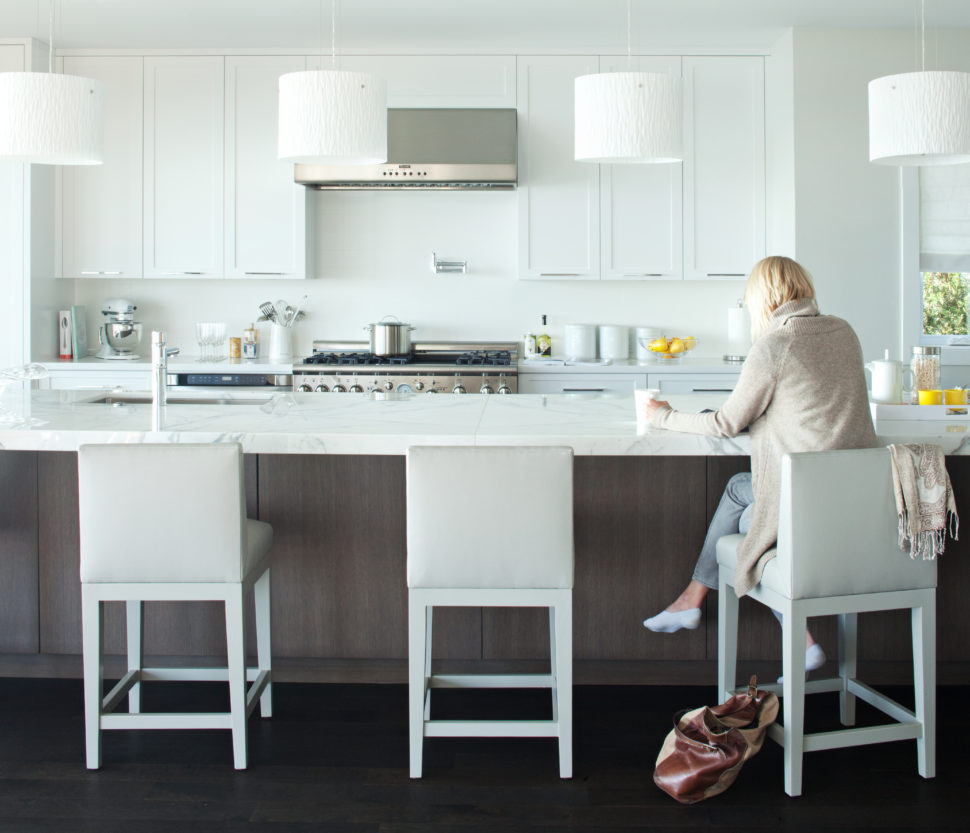 STONE CASCADE
The highlight of the kitchen is the 15-foot-long stone island, designed to be a functional architectural element. A waterfall edge returns the stone to the floor, giving the piece distinctive flair. The kitchen is equipped with appliances by Thermador (thermador.com), Sharp (sharpusa.com/ForHome.aspx), and Bosch(bosch-home.com/us). Faucet by Grohe (grohe.ca). 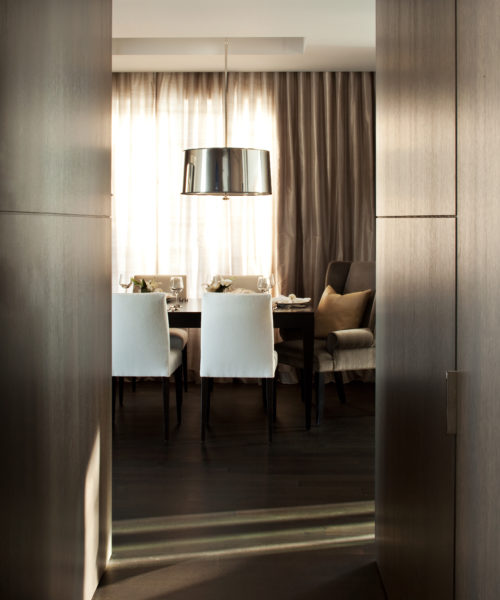 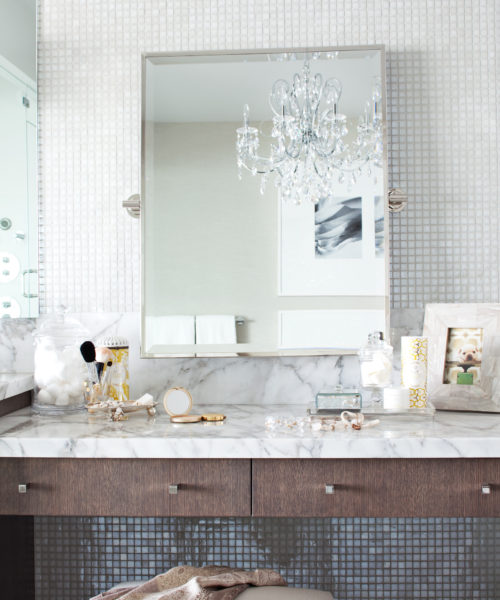 ORNATE BATH
Heated floors and a steam shower set the master en suite apart, as does the impressive Marcalina chandelier (kichler.com), positioned in the centre of the ceiling to take volume out of the expansive room. Other luxurious details of the bathroom include Atrio faucets by Grohe (grohe.com) and a stained white oak vanity by Modular Creations Inc. (modularcreations.ca). 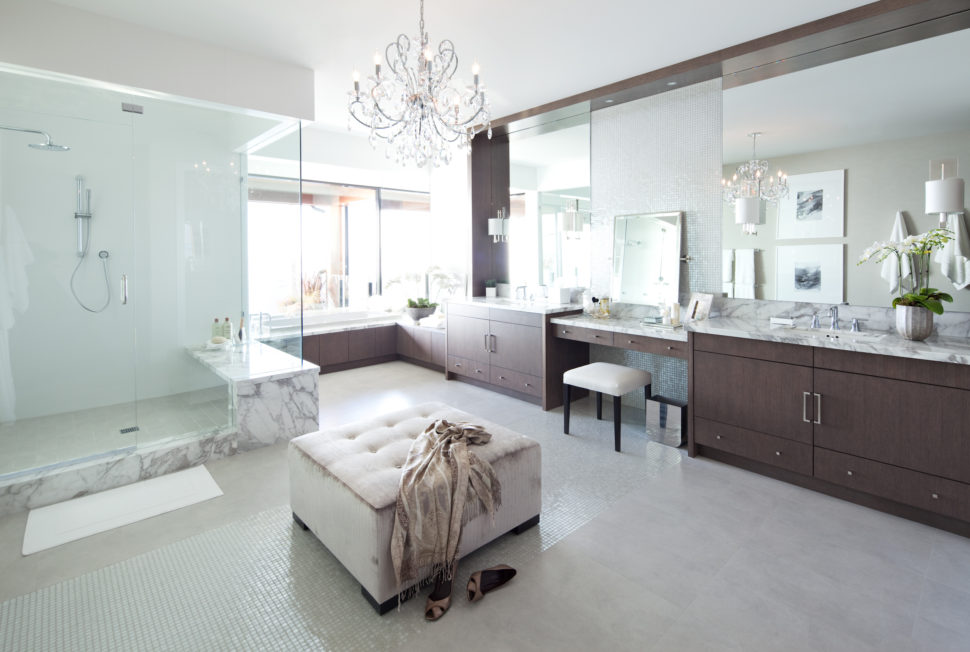 LUXURY CALIBRATION
Scale was critical in the large space, so the team made the bed wall a focal point by upholstering it entirely and flanking the king-sized bed with substantial, custom-built side tables. Millwork by Modular Creations Inc. (modularcreations.ca).